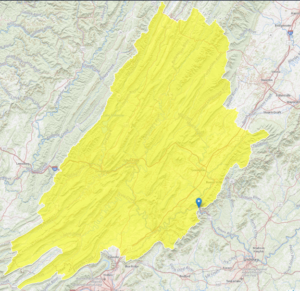 The Upper James River Watershed is highlighted in yellow. The blue pin marks the confluence of the James River and the Maury River.

Southwest Virginia is home to some of the most pristine and picturesque views in all of the Commonwealth. The James River is a part of the natural beauty of the region and is where Virginia's largest in-state river system begins its journey. Fed by the Jackson and Cowpasture Rivers, the James River mainstem begins at the convergence of these two headwater tributaries below the Town of Iron Gate. It then flows southeast towards Lynchburg, winding its way through the Blue Ridge Mountains. It is a stretch that is heralded by some as the most scenic section of the James River, and it  has the official designation to back it the claims. A 59-mile stretch of the James River between the confluence of the Cowpasture and Jackson Rivers and the Rockbridge-Amherst-Bedford county line has been a part of Virginia's Scenic Rivers System since 1985. This is not an honor bestowed upon any river in the Commonwealth; there are only 36 rivers with this prestigious accolade!  The Upper James River watershed is typically considered to be the portion of the James above where the Maury River flows into it at the Town of Glasgow. The Upper James River Trail contains over ten access points along this stretch, making it easy to get out and enjoy the area.

Want to learn more about the waterways in the Upper James River Watershed? Check out these blog entries that highlight various waters of the Upper James!